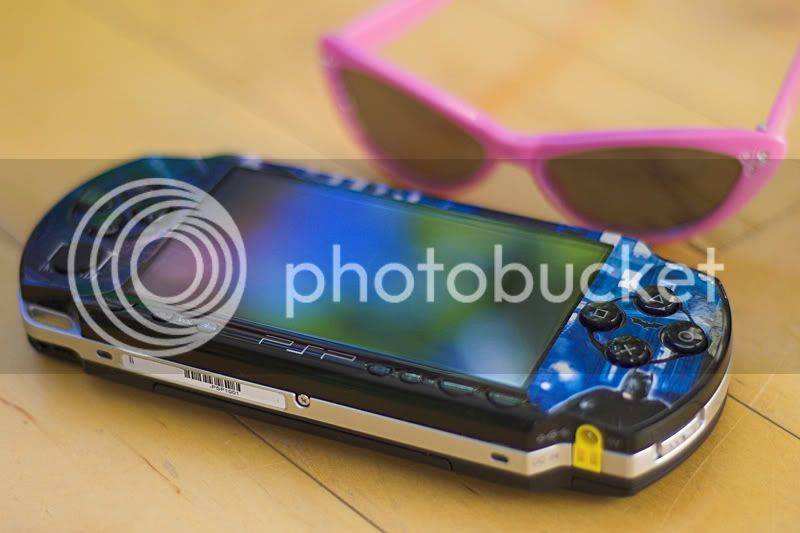 I've meaning to post about this for a little while but I wanted to make sure that I got everything working first. Last week, the last item that I ordered from the Best Buy's online Boxing Day Sale finally arrived. It was a San Disk 4 gig Memory Stick Pro card that had been back-ordered.

I bought the 4 gig memory card to use in the other thing I bought myself: a Sony PSP! I didn't know much about the PSP until someone I knew showed me theirs. It looked pretty good so I got interested and when I saw the basic console on sale, I decided to get it.

It wasn't until I got the PSP in the first shipment that I started to research more about it and I discovered a whole new world of Homebrew and downgrading. When Sony first introduced the PSP, it had the ability to run "homemade" software and people took advantage of that to write programs and games and share them with others. With subsequent firmware upgrades, in addition to adding new features, Sony has removed Homebrew capability with additional security patches. Thus you have the phenomena of "downgrading"--taking your newly purchased PSP with updated software, and switching it back to the good old days of Version 1.5 where Homebrew lives in glory.

So what I have right now is a Sony PSP running version 3.03OE (Open Edition) which gives me all the Homebrew ability of version 1.5 but also all the new features and capabilities that Sony has introduced. I'll describe some of those in another post.

Now downgrading is not without risks. It is possible to turn your $200 PSP into a brick, but if they steps are done correctly you can minimize that risk. I already posted some of the links I used to help me in my del.icio.us bookmarks, but here are the steps I followed:

1. What arrived at my doorstep was a PSP with firmware version 2.71 and a TA-082 motherboard. Sony introduced more anti-homebrew security with this motherboard. The latest firmware was version 3.03 which was released in December 2006 and it was lucky that Best Buy sent me the older model because it is the last version that is currently "downgrade-able." Anything over 2.71 is not. I followed the excellent steps posted here by Jak_Master to downgrade from 2.71 to 1.50.

2. Once I was at firmware version 1.50 I was able to install the custom firmware written by Dark_Alex, version 3.03 OE-B. It seems the whole Homebrew community owes a lot to Dark_Alex. Once again I used the excellent steps written by Jak_Master to install 3.03 OE. It took my PSP about an hour to run through the whole process--much longer than other people. I think it may have been due to the speed of the 1 gig memory stick I was using.

3. Last night I upgraded to version 3.03 OE-C. Immediate improvements include a faster boot time, and higher Wi-Fi speeds. It's awesome. This step took the longest, almost an hour and a half. Make sure you have the PSP plugged into the wall outlet if you attempt to do this yourself.

BTW, I don't wear pink sunglasses! When I was taking pictures of my PSP for this post, my 4-year-old daughter stopped playing and watched me instead. She took off her sunglasses and as I was composing the shot, she gradually pushed the sunglasses closer and closer. She was very pleased with herself when I took a picture of my PSP with her sunglasses :0)