Showing posts from April, 2009
Show all

- Monday, April 27, 2009
We have a chance to change the electoral system in BC on May 12 by voting YES for proportional representation. It is far superior than the traditional "First Past the Post" system where it's possible for a political party to win a majority government even without a majority of the popular vote. With BC-STV Proportional Representation, people won't have to feel that their votes are "wasted" like it is now with the current system. May 12--Vote YES for fair election results! Check out http://stv.ca for more information.
Post a Comment
Read more

- Friday, April 24, 2009
It's been almost two years since I first uploaded this video, The Band Played Walzting Matilda by Eric Bogle. I have to admit that I didn't know very much about the Battle of Gallipoli at that time. I've learned more since then especially after reading people's comments about it I've grown an even deeper appreciation for the sacrifices made by everyone.
Post a Comment
Read more 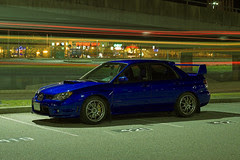 420 Originally uploaded by istargazer . I took this picture almost 2 years ago shortly after I had the RCE Sport springs installed on my 2006 Subaru Impreza WRX STI. The location is a Park and Ride station and I thought it was an interesting spot. I had no idea the significance of "420" until someone posted a comment. I had to google it to find the meaning to educate myself--LOL! Anyway, there was a huge crowd in downtown Vancouver today commemorating the occasion.
Post a Comment
Read more

- Monday, April 20, 2009
This song, a cover of Major Tom by a group called Shiny Toy Guns is played on a commercial for the 2009 Lincoln MKZ which you can see here . This is the latest song to make it into my collection, but my iPod Touch went wonky this afternoon and became unreadable by iTunes. I had to restore the factory settings and am currently waiting while everything gets gets transferred from the backup. I don't know why what happened but I did notice the last couple of days that more apps were crashing on it. Hopefully, this will cure the symptoms, but right now I'm going through a little withdrawal from the iPhone apps :-P ---------------- Now playing: Shiny Toy Guns - Major Tom (coming home) via FoxyTunes
6 comments
Read more

VW R32: Importing a vehicle into Canada from the U.S.

- Monday, April 20, 2009
I've posted previously that I imported my 2004 VW Golf R32 to Canada from the U.S. when I relocated to the Land of Tim Hortons; here I want to provide some of the details on an initially daunting but ultimately straight-forward process. It goes without saying (though I'm still saying it) that I'm describing my own experience with importing my R32 -- and my memory is already hazy -- and anyone planning on importing a vehicle in to Canada from the U.S. is advised to visit the Canada Border Services Agency (CBSA), Registrar of Imported Vehicles (RIV) and the U.S. Border Protection Agency (BPA) websites for the latest information. Read more beneath the fold.... First things first: visit the RIV website for the link to the latest list of admissible vehicles, hosted by Transport Canada . The list will tell you what if any modifications to a stock vehicle are required for importation, and whether it can be imported at all. This list does get updated. For the first few
7 comments
Read more

- Tuesday, April 14, 2009
I was searching YouTube tonight for a couple of songs I heard on some TV commercials when I happened to find this song: The Gun by the Zinga Warriorz. I'd never heard of them before and this is from a live recording they did in May 2007 at down 2 earth studios in Birmingham, UK. Pretty catchy and now living on my iPod.
3 comments
Read more

The stock Aristos on my R32 have been relegated to winter wheel status. In preparation for the other three seasons I purchased 18x8 O.Z. Crono HT wheels. I haven't installed them yet as it still hasn't been consistently warm (it snowed 6 days ago) in the Land of Tim Hortons. I went with 5-spoke wheels because no matter how much I like how they look the 15-spoke Aristos are a pain to clean. The Crono HTs are also lighter at 19.5lbs a piece, compared to the hefty Aristos' 28-29lbs. See below the fold for a picture. I'll post more pics once I get these wheels installed.
1 comment
Read more

- Saturday, April 11, 2009
The weather finally seemed stable enough for me to put on the all-season tires and 20" chrome wheels back on our 2007 GMC Yukon XL Denali. I'm glad to say that it was much less work than back in November when I switched to winter tires and swapped the wheels 10 times ! (Click below for more.) Of course, things don't always go as smoothly as I intend and this time it was trying to re-program TPMS (tire pressure monitor system). I had no problems doing that back in November, but yesterday I wasted over an hour inflating/deflating the tires numerous times and I just could not get the sensors to register. I got as far as three tires, but even doing that wasn't consistent. At least I'm not getting any warning lights in the dash. These 20" wheels are OEM so there were originally programmed already and the system must remember the sensors. Which is good. I can look at the readings to see if all the tires are the same. Recommended tire pressure for the 20" rims
2 comments
Read more
More posts