Showing posts from August, 2006
Show all 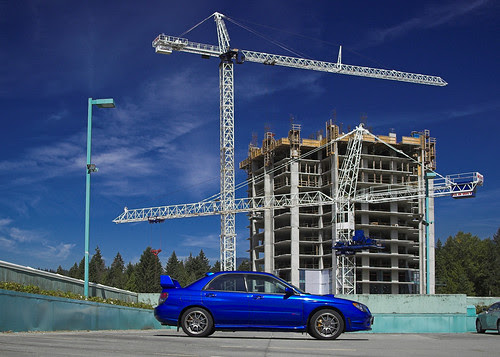 I took this picture today from the roof top of Henderson Mall. Lately, I've been spending a lot of time on Flickr looking at some really amazing photography, and trying to learn about taking pictures. I think an important part of learning is understanding what you didn't know before.... In the beginning, I was very happy with my first point-and-shoot digital camera. I thought it took great pictures. But as time passed, I realized that there were certain things that I wanted to accomplish that the point and shoot prevented me from doing. I was ready for a digital SLR. I bought the Nikon D50 with a really cheap (free) lens because I knew I didn't know enough to tell the difference. I thought I could eventually buy a new lens when I knew better. Well, I know now that I want a new lens. Lots of people say that you have to shoot in RAW format. It is the only way to shoot. I tried it after I bought the D50, but I found it a lot of extra work to have to process the RAW file
Post a Comment
Read more

Gilligan's Minnow no longer lost I didn't know that there was a BC connection to Gilligan's Island until I heard it on the news last night. One of the four boats used in shooting the show is located on Vancouver Island and is now for sale. Ironically, it also ran aground on a reef (near the Queen Charlote Islands) and was being restored by it's owner. This particular SS Minnow was used on the opening credits of the second season. I loved watching the re-runs (the original show aired from 1964 to 1967)--although I'm not sure why the professor couldn't fix the boat even though he built all the other fancy contraptions on the island.
Post a Comment
Read more

Trying to keep the magic of childhood alive and Oprah is not helping!

Hedonistica - Elmo on Oprah A re-run of Oprah's episode with Elmo was on today and my kids just happened to see it. While Oprah interviewed the man who was the voice of Elmo (who happened to have his hand up Elmo's butt), Cal just kept repeating: "Elmo's a puppet! Elmo's a puppet! Elmo's a puppet!" Now I know she's long outgrown Sesame Street, but my youngest--who earlier during the previews was happily telling me that she had seen Elmo on TV--was eerily quiet during the actual segment. It's getting harder and harder to keep the childhood magic alive without the harsh reality of the adult world storming into my little girls' lives. The other day we were watching Michael Palin's excellent documentary, Pole to Pole in which he travels from the North Pole to the South Pole in the most direct route possible over land. In the first episode, he stands next to a marker that indicates the North Pole, and the first thing Sid asks is, "Whe
Post a Comment
Read more

There's always a first time... , originally uploaded by istargazer . I've been seeing the term "OOB" used more frequently and was curious to know what it was. It stands for "out of bounds" or "out of box" and refers to a 3-dimensional style of picture where the subject appears to leave the frame. This is my very first attempt at oobing. I don't think that the picture that I started with was the best because of the line from the edge of the pavement--it interferes with the distortion illusion. I'm going to have to find a better picture to try....
Post a Comment
Read more

Blackhole Motorsports :: View topic - Horn I found out that some people are using my sound file of the dixie air horn on my VW Passat to customize the EA Sports computer game NASCAR SimRacing . Cool.
Post a Comment
Read more

Look at me daddy! , originally uploaded by istargazer . Open Switch - » Kid skillz I'm flattered that the picture of Calista doing a wheelie on her tricycle was chosen to be used in someone's blog entry. As a parent of 3 with one child entering her 2nd year of preschool, I find Ben's topic very relevant.
Post a Comment
Read more

Rising Star , originally uploaded by istargazer . I've been exploring the groups at Flikr and found one called 1 Thing, 1 Week that seems very interesting. This a picture I took to include in the group's pool.
1 comment
Read more

Mission Raceway Park - I went out to the Street Legal Races tonight to try out the STI on the drag strip for the first time. There was another Subie there and it was fun running together. I got there late and missed the first run, but I was able to do five before they closed for the night. My launch technique has a lot to be desired, though.... Staging and watching the lights go green happens so fast there's hardly time to get ready! My best result was the middle run and this is what I got: 60 ft: 2.229 1/4: 14.555 MPH: 96.10 At least I'll have some base numbers to use in the future when/if I do any power modifications. I forgot to charge the battery in my camera so, sorry, there aren't many pictures from tonight.
2 comments
Read more

- Friday, August 11, 2006
I got the second oil change done this morning. It was a little overdue. I didn't realize how many km's I had put on it this summer with those cruises to Alki Beach/Chinook Pass and the Cascade Loop. It went by really fast. The next change will be sooner because I'm going to stick to the original service schedule. I'm also thinking of using synthetic oil next.
2 comments
Read more

COLORWORKS came yesterday morning and fixed the damage from the hit and run. Even though it was raining outside, they were able to setup a tent and work on the car. The colour match looks really good. They said that I would be able to drive the car in the rain right away but told me not to wash the car for a couple days and not to wax it for about a month. There are a couple of areas where the paint looks a little flat. The guy explained he couldn't buff it a lot in that area because the clear coat was really thin, but it would shine like the rest of the body once a coat of wax was put on.
Post a Comment
Read more

Look at me daddy!

Look at me daddy! , originally uploaded by istargazer . I was having a bit of fun this morning while the STI was being fixed by Colorworks . This is my second daughter. She has some mad skillz because she can do a wheelie with front-wheel drive. I have to talk to her about wearing the proper gear, though :rolleyes:
1 comment
Read more

Biker Boyz on Highway 1 , originally uploaded by istargazer . We were coming home from Playland tonight and encountered three bikers on the freeway doing stunts. My camera was in the trunk so I asked my 7-year-old daughter to take a picture with her camera. (It doesn't have zoom so I cropped the picture a bit.) This guy was going the speed limit (90 km/h) in late afternoon ( 6pm) rush hour traffic. It's actually the third biker I've seen doing wheelies in traffic this summer.
Post a Comment
Read more

Subaru Six Stars , originally uploaded by istargazer . Subaru is a Japanese word that means unite, as well as a term identifying a cluster of six stars, which the Greeks called Pleiades - part of the Taurus constellation. According to Greek mythology, Atlas' daughters turned into this group of stars. In 1953, five Japanese companies merged to form Fuji Heavy Industries Ltd. The new corporation adopted the Subaru cluster of stars as the official logo for it's line of automobiles.
Post a Comment
Read more 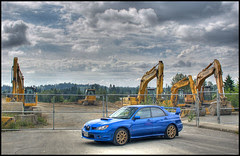 Best Of Top-V: Subaru STI road construction Subaru STI road construction , originally uploaded by istargazer . I'm honored that this picture was chosen for the Best of Top-V. Since that picture was taken, the road between the two mountains has been completed and is totally covered in fresh asphalt. I'm sure development of the land around it will continue quite quickly. Progress???
1 comment
Read more

- Monday, August 07, 2006
One of the guys we cruised down with for the Alki Beach Subaru meet in Seattle created a great slideshow with some pictures of the day. Check it out!
Post a Comment
Read more

By the light of the day

Well, I finally got a better look at the damage in daylight. After I washed all the scuff marks off, it's not as bad as I first thought. There were scuff marks from the underside of the bumper to the top but not far enough up to hit the tail light (whew!), so it must have been a smaller car that hit me. Where all the paint was removed will definitely have to be sanded down because it's all rough there.... I crawled under the car and took a look behind the cover and while there is styrofoam in certain areas, there's none in any of the corners. The picture above is NOT my car. It belongs to Subie Gal over on Nasioc and it shows what it looks like with the bumper cover removed. Where I was hit was just past the bumper beam. I could see where the cover touched metal and it was more to the side--nothing structural--and definitely not too firmly. I guess that's why there are no cracks and the cover kept it's original shape. My respect goes to the car designers at Sub
1 comment
Read more

I had dinner at the Boathouse in New Westminster tonight. Hadn't been there for years because I didn't have good experiences (mostly with service and their unscrupulous automatically-adding-the-tip policy). Gave them a try again and the service was good. Went for stroll with family along the boardwalk afterwards. Took a bunch of pictures. I took the picture you see right before we entered the restaurant. It was a nice evening. "WAS" is the key point here.... I got home and the first thing my dad says to me after I pull into the garage and get out is: "Somone hit your car?" and he points to the driver's side rear bumper.... I go, "WTF?!?!" and then I see it's totally scuffed up and there's a spot where the paint is totally rubbed off through to the black plastic!!! It looked like someone who was pulling into the parking spot misjudged the turn-in and hit my bumper. I was parked to the right of a handicapped spot when it happened. When
1 comment
Read more
More posts