Panasonic vs. Sony: And the winner is... LG! 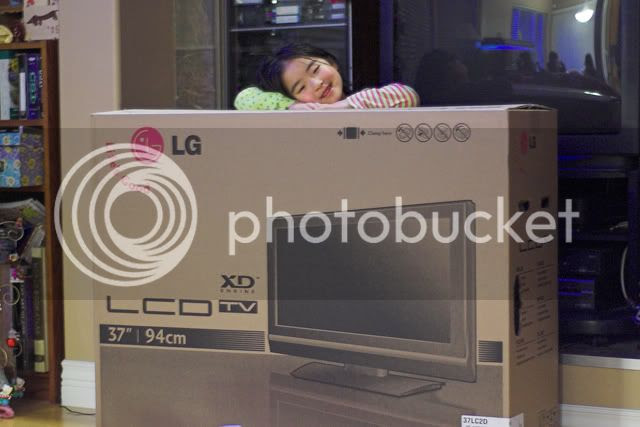 Well, it finally happened: we bought a new TV. This is definitely not a common occurrence because the last TV we bought was a 19" Toshiba I picked up from London Drugs about 8 years ago.

The reason for this momentous occasion is the (imminent) death of the main TV set in our living room: a 32" picture-tube Panasonic GAAO. In it's glory days, it was a wonderful set and it's definitely seen a lot of use. Being at least 15 years old, it has probably outlasted it's lifespan. I noticed for awhile now that the sound coming from the set was getting harder and harder to hear. I would turn it up louder, but I still couldn't understand what was being said. I thought there was something wrong with my ears. I turned it up so loud that the garbled noise filled the entire 3 floors of our house. The problem finally visualized a couple of weeks ago when the screen started to sputter and pop for a few minutes whenever we turned the TV on.

Now I think that 15 years is a pretty good track record. I don't think there are very many consumer electronics that can be used for hours and hours almost every day of the week for 15 years without a hiccup. Yet, I can't help but question the quality of Panasonic televisions. Why? Because we have a couple of Sony television sets that are even older and are holding up strong.

The first is a 27" Sony that my wife's parents bought just before I met her back in 1987--over twenty years ago! I was so impressed with the picture and sound ("surround-sound" was just introduced) that I convinced my father to buy a similar 27" Sony a couple of years later. Both are still in use and both are running perfectly. So our plan is to dump the Panasonic, bring the 27" Sony downstairs and use that as our main viewing set. (I've already taken measurements, so when the Sony dies we can get a 52" plasma!)

Right now, the Sony is sitting in the IKEA wall unit in our bedroom but, like all picture-tube televisions, this set is so heavy that there's an uncomfortable "curve" on the shelf where it rests. It will now be replaced with a brand new (and much lighter) LG 37LC2D--a 37" flat panel LCD TV :0) I was so surprised how easy it was to carry home and setup by myself. I chose this particular model because it's a mid-range LCD that got good ratings in the November 2006 issue of Consumer Reports. Flat-panel TVs are too new to have a long track record, but CR says that LCD and Plasma sets have shown to be just as reliable as picture-tube TVs in the first 2 years.

For now, the new flat-panel is in the living room and it will stay there until at least after the SuperBowl next week. I actually heard on the radio that TV sales peak every year in the weeks leading up to Superbowl Sunday. I guess I've just added to that statistic!

Postscript: I've done some more reading about this particular LG flat screen, and there have been some minor changes in the specifications. The model number printed on the box states: 37LC2D-UE. Changes in this model include two HDMI inputs (vs. one) and one coaxial input (vs. two) and support for higher resolutions when connected to a PC.