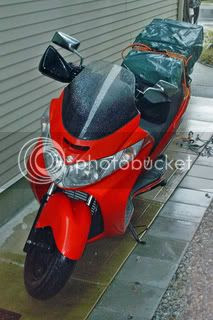 I decided to take the Suzuki Burgman out to Point Roberts today to pick up the RCE sport springs I ordered for the STI. It was raining in the morning, but the forecast was for sunny breaks in the afternoon.

Unfortunately, I forgot to put the rechargeable battery back into my Nikon D50 and was unable to take any pictures of the Burgman. I actually had the bike all positioned for a photo shoot by the boat ramp at the beach in Point Roberts when I discovered that I had no power in the camera. At least it was a good ride and I had an opportunity to really stretch my legs on the freeway--especially since I started my trip by heading in the wrong direction....

I mistakenly headed over the Port Mann Bridge south towards White Rock instead of west and I ended up doing a loop through Crescent Beach before turning around and heading to Tsawwassen and Point Roberts. The Burgman handled really well at high speeds even with heavy crosswinds. Tucking in behind the windshield helped, especially when encountering the turbulence behind and in front of the 18-wheelers.

The only things I didn't like were the repair patches that seem to streak across the lanes on the freeway for no apparent reason. I don't even know why repairs were even needed because it looks like a perfectly fine road was simply gouged and gashed up so that strips of repair material could be applied. The problem is with the repair material which so smooth that when wet becomes very slick--especially for people on two wheels. I could feel the wheels on the Burgman do a little squiggle every time I went over them.