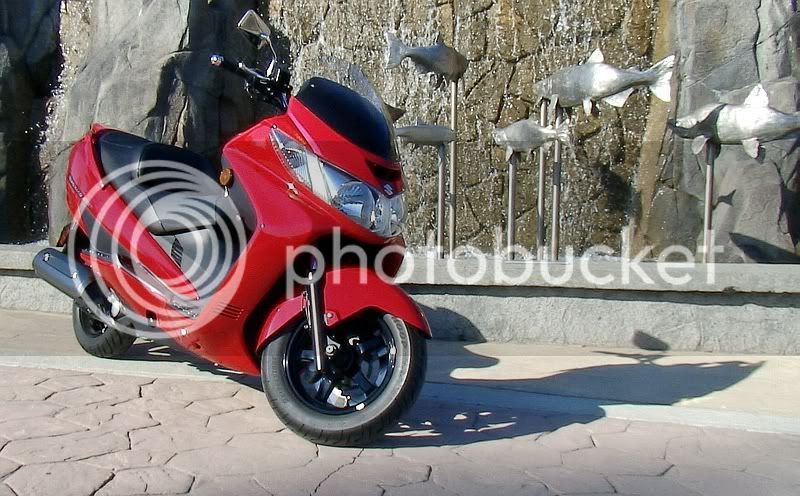 It had been more than 5 weeks since I had the Burgman out for a ride--ever since Aston was born--but with being so busy all this time, the fact that the battery could have died escaped my mind completely....

Actually, the last time I had her out (the Burgman, that is) she started up no problem despite sitting for a couple months through the snowy winter. This morning there was no sign of life at all. I opened the glove box and removed the cover for the battery. I had never actually seen a motorcycle battery before: I figured I have to take it out to charge it. Getting it out was no problem, but then I realized it was probably better to charge it in the bike so that I could perhaps jump start it. That was the tricky part, getting the battery back in because the wires and the tight space made it difficult.

I looked at the specs on the battery and it looked like it said 5A. I had a 6A setting on my charger--negligible, I figured. With everything hooked up, it didn't look like much was happening. I waited a while and then tried to jump start it with the charger. Nothing. I switched to 12A and then there was action--the needle jumped up. I moved the switch from "Charge" to "Activate" to and tried to jump starting it again. Still nothing.

Then that's when I realized that I didn't have the key in the ignition! Doh! After that, it started up fine and I let it run while I checked over the bike for lights, horn, tires, etc. I was able to ride for at least 30 min before I had to shut it down and it started up no problem afterward. It was a beautiful day for riding.