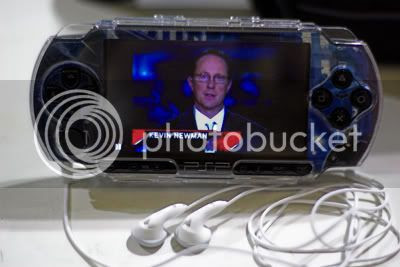 There's a new custom PSP firmware version available. It offers a few more features, and I upgraded a few weeks ago, but I don't think it's as stable as the earlier version that I had....

I haven't decided if I'm going to uninstall it, but some of the problems I've noticed is that it seems to freeze sometimes when I want to watch a video podcast that I have saved on the memory card. I then have to hold the power button to shut the PSP off and then reboot it. It never happened before the update.

The other problem I've noticed is that the timer for saving RSS feeds automatically doesn't seem to work consistently anymore. I'm not exactly sure what the problem is since I always have the WiFi turned on and the PSP in standby. Before I knew that it worked because the screen would automatically turn on at the set time and start downloading. But now, it doesn't always do that and when I check the PSP none of the RSS feeds have been updated.

One of the benefits of this update is that it allows you set the screen at a brighter "4th" level while on battery power. This level of brightness was previously available only if the PSP was plugged into AC power. This makes it easier to view the screen in a bright room--however it does reduce battery power significantly.