Wow, hell must have frozen over because when subscription-based satellite radio first became available a few years ago, I vowed never to pay for something that I could get for free. I had witnessed the commercialization of the Internet (am I dating myself?) and public radio was one of the pleasures I enjoyed that was absolutely free. That changed today.... 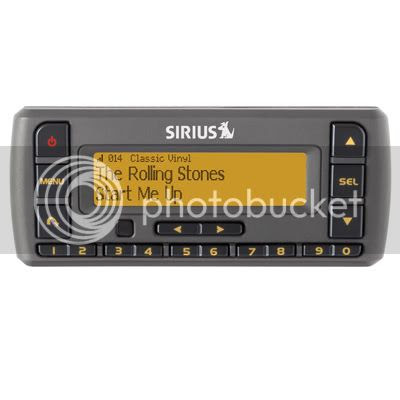 Today I am an official subscriber to the Sirius Satellite Radio network with over 130 channels of commercial-free music and talk radio. Does that sound too much like an advertisement?

The primary reason for this change was our upcoming Road Tripalooza '07. Having already traveled long distances throughout this vast continent, the idea of having to spend hours either listening to the same 6 CDs over and over again or searching for something tolerable to listen to on the radio was just not appealing. Plus, when you do find an acceptable station, it's usually gone before long--especially when you're going 70 mph on the Interstate.

Sirius Satellite Radio was the obvious choice for me because I preferred the programing (CBC Radio One, NHL hockey games, news and talk), the radios they had for sale were cheaper, and they were offering special promotions. The cost of the Stratus radio (pictured above) was $49.99 after the $20 mail-in-rebate. Plus, the place where I bought it from (The Source, formerly Radio Shack Canada) was giving away $25 Petro Canada gas cards with each purchase, so basically it cost $25 just for the satellite radio. Also, the activation fee of $19.99 was waived if you bought a 1-year subscription (which already saves you $14.99 off the month-to-month rate). My original plan was only to buy 3-month's worth of time and evaluate, but I decided to go for the whole year instead.

Installation was very easy and the activation process was very simple. Despite being immersed in technology all the time, it's power still amazes me. Once I installed the radio and verified that it was getting a signal and sound, I went to my computer and entered all my relevant information. Within 30 seconds of the final mouse-click, the satellite radio was activated and had downloaded all the available stations from the network and I was happily channel surfing.

Another added bonus for subscribing is that you can listen to many of the Sirius channels streamed through your Internet connection. I've been checking out a lot of the stations while I've been working on my laptop :0).

Here's how I installed it in our 2006 Honda Odyssey Touring.