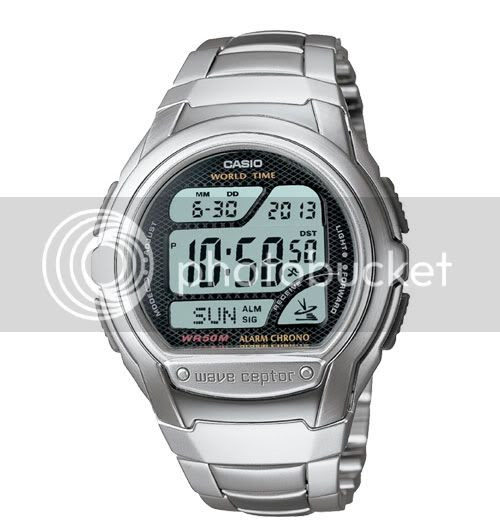 I bought myself a new Casio Wave Ceptor "Atomic" watch last week. I wanted something for our road trip that was digital and cheap. My first thought was to get a Timex but when I went to Zellers, I saw that they had a large selection of new Casios. On top of that, the Casio watches were 40% off and I love gadgets and gimmicks so my decision easy....

What makes the Casio Wave Ceptor an "Atomic" watch is that it has a built-in time calibration antenna that coordinates time and date directly from the Fort Collins, Colorado transmitter within a 2,000 mile radius. That covers most of North America (except Newfoundland). When traveling in Europe, it receives the time calibration signal from a location in the UK. It automatically receives the signal from the transmitter (in the middle of the night) and updates its settings accordingly and resets the watch to the split second. Without the time calibration, the watch is accurate to +/- 20 seconds per month. Since I'm obsessed with having accurate watches, there was no other choice but this one for me.

This particular watch also has world time, so it can display the time in 48 cities/29 time zones. This will be handy while we drive across the continent and much more convenient than having just a dual-time-zone watch.