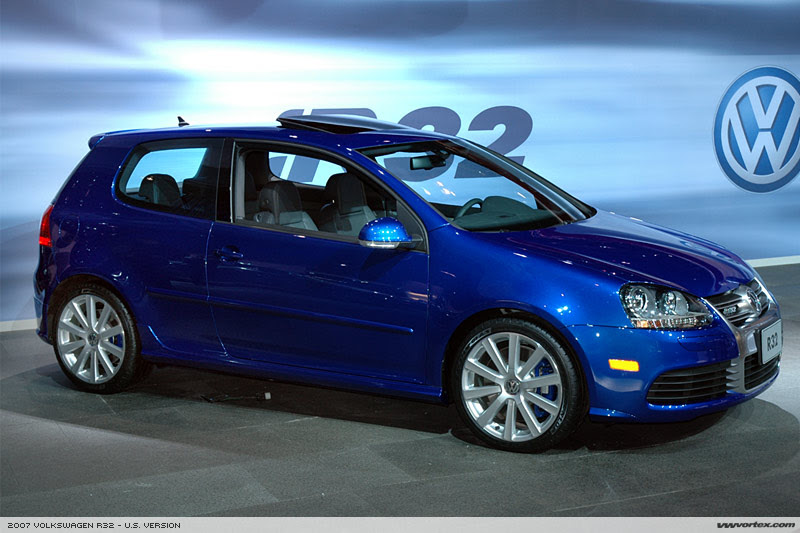 It's finally official. The 2008 MkV Golf R32 will start appearing at United States dealerships in August 2007. Reserve yours now!

The R32’s power comes from a 3.2 L naturally aspirated 15-degree narrow angle V6 engine. With 250 horsepower and 236 ft. lbs. of torque, the R32 is all muscle. The standard 4MOTION all-wheel-drive system transfers at least 75 percent of available torque to the rear wheels. Volkswagen’s acclaimed DSG® transmission allows for seamless gear changes and accelerates from 0-60 in approximately 6.4 seconds....

Current GTI and R32 owners will be notified of the opening of an R32 micro-site on www.vw.com, concurrent with today’s introduction. An R32 prospect will complete a purchase interest form, thereby generating an R32 Certificate. The first 850 people who present an R32 Certificate along with a deposit to an authorized Volkswagen dealer, will be able to secure one of the first R32 vehicles to be delivered in August 2007.--VWvortex

I think the DSG transmission and Bi-xenon lamps are the only changes of any significance, and personally I'm not sure whether I'd still rather have a stick shift. It's hard for me to say as I haven't had a chance to try out a car with DSG. It also looks like the engine in the 2008 R32 is essentially the same as the 2004, 250-hp and 236 ft-lbs of torque. If you're bored, you can read my thoughts on the subject in a previous post.

Anywhoo, if you wanted a brand new R32, looks like you'll be getting another chance. :o)

Hmmm... it just occurred to me that the article doesn't mention whether Canada will be getting any 2008 R32s.