Showing posts from July, 2008
Show all

On the afternoon of Day 2 of our Oregon trip we walked across the street from....

...the Portland Children's Museum to see the Dinosaur exhibit at the Oregon Zoo. It was pretty neat and the robotic animals were impressive and definitely scary for the younger kids! 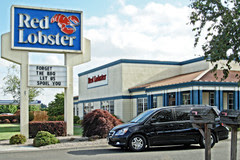 Red Lobster, Salem, Oregon
Originally uploaded by istargazer. We went down to Oregon last week for a few nights and no trip to the United States would be complete without a trip to a Red Lobster restaurant :0)

This was Day 2 after spending the day at the Portland Children's Museum to tie-dye some T-shirts and the Oregon Zoo to see their robotic Dinosaur exhibit. We stopped at the Woodburn Company Stores outlet mall to exchange a shirt I had bought and went down to Salem for dinner. Service was very good and super fast and the food was delicious!

I brought along my Sony GPS data logger again, but I've had some problems matching up the photos with the data. I guess I hadn't used it in about a year and the unit had a hard time syncing with the nav satellites. All the data was offset buy a few hours. I'll try to upload the other pictures when I get a chance.

This picture is geotagged but I did it manually through Google Earth. You can view it on the Flickr Map.
1 comment
Reactions:
Read more 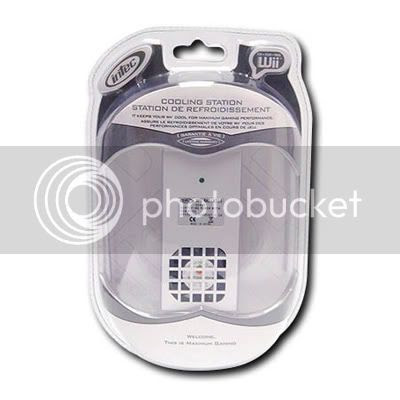 I bought the Intec Cooling Station for Wii from Best Buy for $10. It's a USB fan that plugs into the back of the Wii and directs air to help keep it cool. I've had success using USB laptop fans to keep my HD-PVR and A/V receiver cool so I thought I would try it with the Wii.

It works as advertised, however, it is powered and running all the time. Since it blocks the USB ports in the back, there is one extra port on the side for you to use. I'll have to buy a USB hub because I still need one more port so I can plug the Rock Band drums and a couple of microphones at the same time.

The biggest problem with the Cooling Station for the Wii is that it's very noisy. It's not a big deal when you're watching TV or playing a game because it's not noticeable, but when the room is quiet the fan seems very loud. 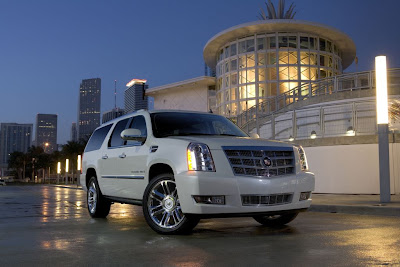 I went back for another test drive of the 2008 Toyota Sequoia Platinum today. It was slightly rainy and we were given a black one (instead of the white we got last time). I'm glad I got to see this colour scheme because it made the interior look way better (less cheap) than I remembered.

I also confirmed my initial impressions about the Sequoia's ride quality: the Platinum trim level definitely makes the Sequoia feel much smaller than it really is. The difference in ride quality between it and the Limited is noticeable and significant.

While the Limited handled well, it still felt like a truck. I'd say that with the adaptive suspension set on the Comfort, the Platinum is slightly better (has less lean) than the Limited. I liked the Sport setting the best because it made the Sequoia flat in almost all turns. Maybe the way it handled made me....

...believe that throttle response was better.

It actually fits in our garage! 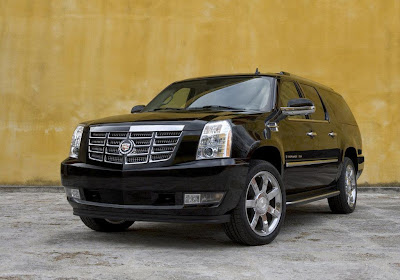 Shhh.... don't tell anyone, but we actually checked out a 2008 Cadillac Escalade ESV last week. ESV is the extended version and is about 19' feet long. It has tons of cargo space behind the third row, and yes, looks....

...a bit barge-like. The interior is finished really nicely though, and the rear entertainment system comes standard with 2 roof-mounted LCD screens. The 22" chrome rims fit the Escalade's image as does the loud rumble of the top-in-class 403 HP V8 engine.

When I got home I took the tape-measure out and discovered that with a little re-arranging, we would be able to fit the Escalade ESV completely inside our garage.

During our road trip to Portland, Oregon, I decided to count how many Escalades, Mercedes GL-Class, and new Toyota Sequoias we saw on the road. This was the final count:

We also saw tons (literally) of Suburbans (which are about the same size as the Escalade ESV). 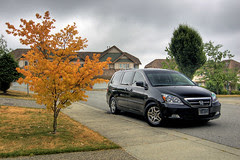 Honda Odyssey in HDR
Originally uploaded by istargazer. I had the our Honda Oddity washed and waxed today in preparation for our road trip next week. And since it was all clean and shiny I decided to take some fresh pictures.

After more than a week of sunshine, it clouded over today--a perfect opportunity for me to try some HDR pictures. I know it looks like a fall picture, bur for some reason our Coral Bark maple tree isn't doing so well this year.
4 comments
Reactions:
Read more 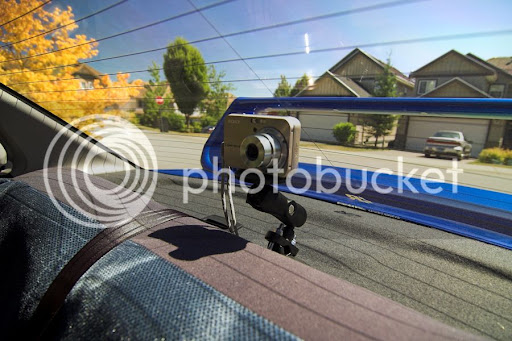 After getting the RAM mount for my STI and testing it out, I realized that I didn't post any pictures of how it actually fit. It worked out quite well except that there wasn't enough clearance for me to use my Sony DCR-PC1000 camcorder. If the arm was longer, I could probably have extended it out more away from the rear window and have enough clearance. I think RAM sells longer length arms so that's always an option for me in the future. A longer arm will also....

...allow me to put the mount on my Suzuki Burgman. Luckily, my point-and-shoot camera fit fine and with a 4BG memory stick I was able to record almost an hour's worth of video. In terms of track time, that meant I could record two full 25 min. sessions.


What I like about this type of mount was that I was able to attach it to one of the child tether anchors on the rear shelf without having to make any modifications to the STI. 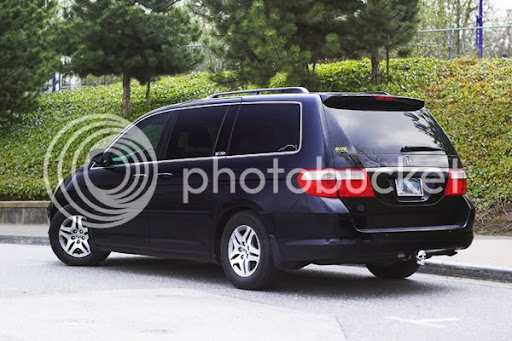 This week I've looked at 3 different vehicles to be possible candidates to replace our Honda Odyssey and Subaru Impreza STI: The 2008 Land Rover LR3, the 2008 Toyota Sequoia, and the 2009 Honda Pilot. In the end, I feel like I've just ended up where I started from. There is no perfect vehicle and choosing one is a matter of choosing which compromises I'm going to be willing to live with.

The truth of it is, I think our Honda Odyssey is a pretty good vehicle for us despite my shallowness in refusing to accept the fact that we are a minivan family. Maybe for passenger space it's not the best and it doesn't have 4WD, but it sure excels in cargo space and convenience. (And don't tell anyone, but sometimes I look at our minivan and I think it looks pretty good--for a minivan.) It's really hard to justify making a change in vehicles for only minor improvements in certain areas while giving up things in other areas.

So, now what? I have such a short attention span t…
6 comments
Reactions:
Read more

I went back this morning to test drive a 2008 Toyota Sequoia Limited. On Monday, I had driven the top-line Platinum trim level and wanted to see if there was any difference in the ride quality. The Limited offers an 8th seat in the second row, but lacks the front and rear Adaptive Variable Suspension (AVS) that allows you to choose between Sport, Normal, or Comfort settings that the Platinum has....

When I drove the Platinum, I was quite impressed and stepped out of the driver's seat feeling that I had been behind the wheel of something much smaller. Somehow the Sequoia's massive size was hidden and it didn't ride or handle like the huge truck it was.

I brought my 3 oldest girls along so that they could all sit in the 2nd row, booster seats and all. This time we brought the back-less booster seats because they have a wider base than our Britax Parkways. There was no problem fitting the two boosters side-by-side and then having our oldest child sitting next to them. Neither e…
Post a Comment
Reactions:
Read more

Yesterday afternoon I went out to the Honda dealership to show my wife the new 2009 Honda Pilot. This is the newly redesigned 2nd generation that has a controversial boxier look and new grille. A lot of people comment online about how much they dislike (hate) the look, but I like it.


I actually like it much better than the original Pilot which I thought looked too bland....

This was my second look at it. After the first time, I got quite excited because I could see how wide the 2nd row was. Honda provides 3 LATCH attachments in the 2nd row in addition to one more in the 3rd row. This is more than most vehicles of this size. I was also excited because on YouTube I found more information about the storage area beh…
2 comments
Reactions:
Read more 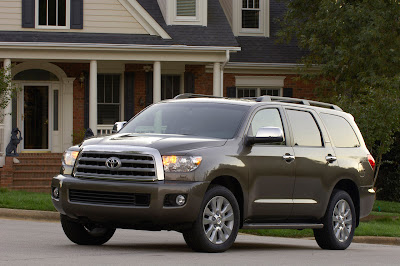 I used to own a 2003 Toyota Sequoia. We bought it back when we had only 3 kids and I loved the amount of space there was inside. Eight adults could have sat in there very c…
7 comments
Reactions:
Read more

- Wednesday, July 02, 2008
Over the years I’ve discovered that I like shopping for cars. I haven’t been able to keep any of our vehicles longer than 5 years before I start getting the itch for something new. And I can see that the cycle is repeating. Over the last couple of weeks I’ve been doing a lot of research trying to find something that could replace both our Subaru Impreza WRX STI and our Honda Odyssey Touring. In the process, I found a site called CarSeek.com.

At CarSeek.com you can find an incredible amount of information about all sorts of new vehicles from sub-compacts, sports cars and luxury sedans to latest the cross-overs and hybrids. Each auto manufacturer is represented by model reviews, history, specifications, pricing options, photos, and rebate information. On top of all that information, there are links to the latest automotive news as well as articles about recent trends like electric cars and hydrogen fuel cells.