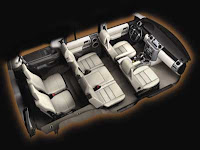 The LR3 can seat 7 people in a 2+3+2 setup. I was impressed with the room in the 3rd row because at 5' 10" (178 cm) I could sit back there without hitting my knees against the 2nd row seat-back. The theatre-style seating and tall roof with 2nd and 3rd row glass roof panels gave me plenty of headroom and an open, spacious feeling. The nice thing about the 2nd row is that can split 35/30/35 so there's a lot of versatility. We need something that will fit 5 children: 1 x Rear-facing, 1 x Front-facing, 2 x boosters, and 1 x slim 9-year-old. The LR3 seemed to have that flexibility to suit our needs. Also, the space behind the 3rd row looke a bit larger than some other cars I've looked at (including the disappointingly tight 2008 Toyota Highlander). One of the advantages of the LR3's split-opening hatch is that it would give us the ability to pile things up in the back without having to worry about falling out. The only problem with the the 2nd and 3rd rows is that folding them seems a bit puzzle-like and definitely not as simple as other vehicles I've seen.

Although we talked to the salesperson about about the 2008 LR3 HSE, I knew that used LR3s were very plentiful and heavily discounted. I wanted the HSE for its V8 engine and navigation system. Unfortunately, Land Rover suffers from a poor-reliability reputation that may or may not be deserving. That means a 2006 model LR3 HSE with full options like adaptive lighting and an electric cooling box can be bought for around $45,000 CAD. Since there have not been major changes over the years, it's a huge savings over a similarly equipped new 2008 LR3 HSE that has a MSRP of almost $70,000 CAD. When it was time to finally go out on the test drive, we were given a 2006 LR3 HSE. 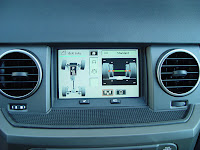 Actually, the first LR3 we tried broke down. This Land Rover dealership had a rock obstacle at the side of the building where salespeople could demonstrate the off-road capabilities of their vehicles. When our salesperson activated the Terrain Response system to Rock Crawling and tried to switch the transfer case into low gear, the LR3 just wouldn't do it. In the 4x4 information display on the NAV screen I noticed a red dash flashing above each front wheel but I didn't know what it meant--I'm sure it wasn't good. We moved to a different vehicle and were able to go over the rock obstacle without any problems. I have to admit it was quite impressive. It was kind of like the sort of the challenge that I would look for when we used to go off-roading in our 2003 Toyota Sequoia. I'm not sure if the the Sequoia could have done it with such ease and in a tight space as in the LR3. While we were going up the rocks, though, I did think to myself: "I'm not going to do this kind of off-roading any more. I've grown out of it."

Sitting behind the wheel of the LR3 is very nice. Right away I notice the tall side windows and the large side mirrors. Visibility is great. The seats are comfortable and it feels like everything is within easy reach. On the road, I didn't get a chance to test the performance of the the 300 hp V8 engine, but it seemed to pull the LR3 reasonably well. It has a 6-speed transmission that you can switch from normal to sport mode. You can also do your own sequential shifting if you want. There actually was a noticeable improvement in performance when set in sport mode. Gears are held a bit longer and acceleration seemed more smooth and the throttle response was quicker. That would definitely be what I would want it set at all the time, but I'm sure that doesn't do fuel consumption any good!

The air suspension on the LR3 is nice. You can set the car to "Access" height so that it lowers 2" to make it easier to get in and out of the car. It makes a noticeable difference because I could touch the ground easily when I stepped out. On the road the LR3 is very comfortable. The prescribed route we took covered some rural roads with cracked, undulating pavement and the LR3 handled it all with very quiet luxury. Because of the softness of the suspension, there was slight body roll that reminds you that the LR3 really is a truck, but the ride quality is very nice and the roll is minimal. I had driven my Subaru STI with sport suspension out for the day, so coming from that I'm sure anything else I drove that day would feel soft! 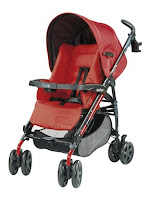 The last test was when we got back to the dealership. I brought our Peg Perego Pliko P3 umbrella stroller to see if it would fit behind the 3rd row. I admit that compared to other umbrella strollers, this one is a bit more bulky but we love it because it can carry a 2nd child standing in the back. Besides, using the stroller to compare storage space between different vehicles will give us a much better reference point. Unfortunately, the LR3 was not deep enough to fit the wheels and was short by a couple of inches. Does that mean that the LR3 is out of contention? I'd hate to base a $50,000 purchase on a simple thing like a stroller (since a regular umbrella stroller for $25 would fit no problem) but it makes it harder to choose the LR3 to be our Number One.