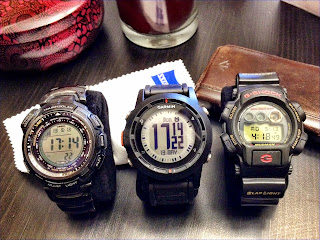 I recently acquired a Garmin fenix GPS watch (pictured in the center in the above photo). It's a very capable sports watch that has the ability to track and monitor a variety of data as well as help you navigate wherever you want to go in your outdoor adventures. My previous ABC (altimeter, barometer, compass) watch was a titanium solar atomic Casio ProTrek, pictured on the left. The third digital sports watch in my collection, pictured on the right is a Casio G-Shock Mudman.

The Garmin fenix has a built-in rechargeable battery that charges through a specially designed USB docking station. When you plug the docking station into a computer you can access the fenix as USB mass storage and backup or transfer files. Garmin says with the GPS on you should be able to get about 50 hours of use. With the GPS off and used only as a watch, the battery should last around 6 months. Timekeeping with the GPS on is very accurate because it synchronizes with satellites, but with the GPS off, the watch looses almost a second every day.

The Casio ProTrek is solar powered so you can use any light source to charge it up.  It is also an atomic clock so every night, if you are within range of the various broadcast stations around the world, the time is automatically synchronized.

The Casio G-Shock Mudman is the oldest of the three I have, probably acquired almost 20 years ago. It is powered by a single standard button battery. In terms of built-in functions and display, it seems pre-historic.

The pictures below show the side profile of each watch. The titanium ProTrek is the thinnest. Also, because the bracelet and case are both made of titanium, the watch is very light and comfortable. The fenix and the Mudman are almost the same height, almost twice the size of the ProTrek. However, the Garmin fenix is very comfortable to wear despite its size. The resin strap is soft and flexible. By contrast, the resin strap on the Mudman is stiff and hard and it is the least comfortable of the three to wear. Part of that may be due to its age. All my other watches with resin straps that old have crumbled to pieces. It's pretty impressive that the Mudman's original strap has lasted this long. 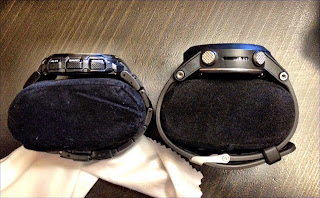 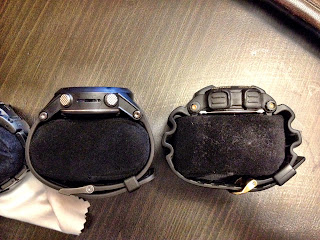