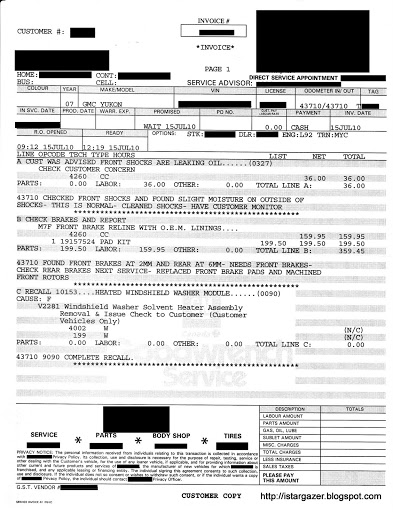 I noticed a faint squeaking from the front brakes as well as a different feel on the brake pedal, so I knew I needed to get the brakes checked before we went on our road trip later this summer. I stopped at a prominent independent shop because of the celebrity-endorsed TV commercials I had seen. They told me that the front pads and rotors needed to be changed and gave me a variety of quotes comparing different qualities of parts.

The cheapest were around $700 and the most expensive with OEM performance were over $1000. Concerned about towing our RV half-way across the country and through the Rockies, I opted for a slotted performance rotor and got a final quote for $1200. They also mentioned that they noticed that the front shocks were leaking but that might be covered under warranty and recommended I check to see if I was still covered. I was scheduled to get the work done later that evening but they called to tell me they couldn't get the right rotor in time.

Because of what they said about the front shocks, I made an appointment with my GM dealership to get it checked out this morning. When I found out from them that my vehicle was no longer under warranty, I called the independent shop back to ask them for a quote. They told me that a lot of labor was involved and it would cost between $800-1000. Yikes!

Even before they looked at the shocks, the service advisor told me that very often the shocks "sweat" and that makes it look like they're leaking but it's not really a problem. And that's what it turned out to be. They told me they would clean it up and then check on them again at the next service. Good news!

The other bit of good news was that they said that the front brake pads needed to be replaced, but the rotors could be machined. They gave me an option of going with OEM parts or a cheaper (noiser) alternative. I went with OEM and it cost me ONLY $400! Incredible! With a little bit of luck with parts unavailabilty, I was able to save over $600--not including the another $1000 that the other shop would have charged me!

The dealer performed a GM recall notice on our heated washer fluid. It had already been recalled once for a fix, but I guess the fix wasn't reliable so they decided to disable the entire system all together and send customers a cheque in the mail for loosing that particular feature on their vehicles. It's a bummer because I really liked the heated washer fluid and never had a problem with it.