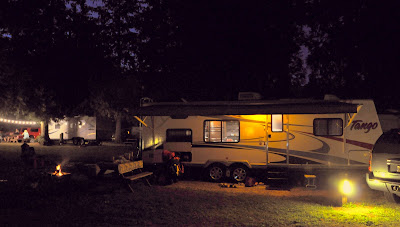 Coming back from Everett, I had the urge to get out on the road again and thought it would be nice to go for a couple of nights before the weekend. There was nothing available at Sunnyside so we took a chance calling the KOA campground in Concrete, WA. It's only about 2 hours away from our home and we had heard good things about it....

This trip started out a bit differently because the trailer was actually in storage. Since the trailer was already equipped with just about everything we needed, we thought it would be simple to just pack the clothes and food we wanted into the Denali, load up at the storage yard and leave from there. It didn't go quite that smoothly though, because that morning after stopping at the Costco in Port Coquitlam for fuel, I realized that I had forgotten the RV keys at home. Luckily, we were only 15-minutes away. In the end, we wereg only 30-minutes behind our original schedule. There was a 90-minute wait at the Peace Arch border crossing, but with our NEXUS passes we were able to breeze right through. There was a bit of a tight turn after the checkpoint, but I was able to make it with the trailer.

One of the great advantages of having the trailer is having a clean, comfortable place to rest and relax where ever we happen to be. Our first stop was at the Custer Rest Area just south of Blaine. It's the first rest stop after the border and we stopped there for lunch, just like we did on our Everett trip. 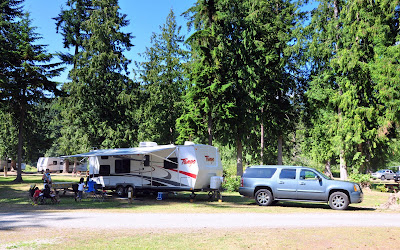 Concrete, WA is just east of Burlington on Highway 20. It's a very nice campsite with large full hook-up spots, as well as a swimming pool, playground, and jumping pillow that the kids had fun with. What was nice about this stay was that this really was an exploration for us to venture somewhere strictly for the campground amenities. No shopping, no tourist activities. It was great. We're going back again for 3 nights next time--without a sewer hookup. Hopefully, that won't turn out to be too adventurous!