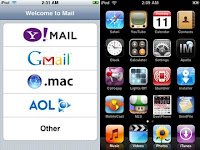 In preparation for our recent trip to Taiwan, I bought a 32 GB iPod Touch. I never paid much attention to the whole iPhone/Touch hype before, but a few weeks before leaving I attended a technology conference where the keynote speaker talked about his iPhone. After finding out that the cost of a digital oscilloscope was in the hundreds of dollars, he was able to buy an oscilloscope application for his iPhone for only $5.

I never knew that there were so many different apps available for the iPhone. I was sold. Of course, I'm not a cell phone user and I refuse to pay such high fees for a monthly data plan, so I bought the iPod Touch. It can run all the same apps and besides the phone function, it is missing only the built-in camera and GPS of the iPhone. And even without the GPS, the WiFi connection in the iPod Touch is surprisingly accurate in locating your position on Google Maps.

I found the iPod Touch to be invaluable during our trip. Much better than lugging a laptop around, I was able to carry the Touch in my pocket and take it out at many of the WiFi hotspots available in Taipei. My favorite locations were at the metro stations because while I was waiting for the next subway train to arrive I was able to check my email, Twitter, and Facebook with complete ease. Despite being over 10000 km away from home, I never felt disconnected. I downloaded all sorts of free apps to help me with currency conversion, checking the weather, tracking expenses, and keeping up to date with news. On top of that I had my music and movie collection and games. I even was able to use the flashlight app a few times!

Now that I'm home, I'm continually surprised at the variety of apps that keep arriving for the iPhone/iPod. Yesterday, I paid for my very first app: Cube Cheater for $0.99--a program that will show you how to solve any Rubik's Cube in 20 moves or less! Another amazing free app I got today was one that I saw on an iPhone commercial....

It's called Shazam. It can listen to a song and then identify the title and artist for you. If there's a video on YouTube it will give you the link to watch it. You can even preview and buy the song from iTunes. I works really well and I promptly identified some unknown songs in my collection that had puzzled me for the longest time :0)