We tested out the wireless headphones for the rear entertainment system (RES) in our Honda Odyssey on Sunday night. The kids couldn't unanimously decide which DVD they wanted to see, so I put in one they hadn't seen in a long time: Blue's Clues. Sid, our oldest, wasn't too impressed, but once it started to play I could hear her getting into it and singing along and following the search for clues.

On our way home, my youngest started to explain to me that, "First it was Joe. Then it was Steve." I explained to her that actually, Steve was first and then Joe came afterwards, but no, she refused to accept it and was adamant that it was Joe who came first. My wife and I both smiled at each other. I guess in her world, Joe did come first. 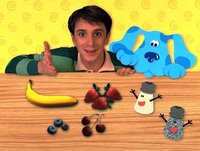 But I started to think about it some more. Was this a sign of things to come? Did I just get a glimpse of the future? A future where 4-year-old Ken would be in her teens--her rebellious teens--a self-professed know-it-all, who would refuse to accept that us old people had any knowledge of the "real" world and how things worked in modern life? Is she going to be--the fear of all fears--The Teenager Who Rolls Her Eyes at Her Parents?

Sigh. Children grow up too fast. I can already feel the grey hairs multiplying on my head. Long live Steve!