The Amazing World of High-Definition Television 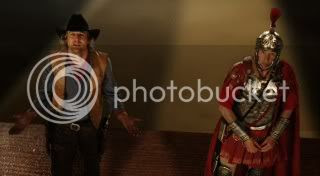 I've seen the High-Definition displays in the stores and to be honest, I thought the HD television channels looked great, but not awesome--at least not awesome like the examples shown in high-definition DVD format.

I was always worried that maybe spending extra money on an HD PVR to watch just a few shows in HD wouldn't be worth it. We already have a PVR that's been great for us. I didn't think we needed a duplicate.

That changed. I am now converted. I am a true believer....

I bought a Motorola 3416 HD PVR (160 gig) on the weekend and installed it on our 37" LG LCD TV. Connected through HDMI, the picture is really, really good on the standard definition channels. That was the biggest surprise. Reading on the forums, a lot of people complained about how bad SD shows were. I found the opposite. The regular channels are actually improved and sharper looking with the new Motorola.

And the high-definition channels? Just amazing. It looks so real that it seems "unreal." I found an NFL game playing in HD and it looked so realistic that I felt like I could have reached into the screen and picked up one of the players on the field with my two fingers!

So getting the HD PVR is definitely worth it. It also comes with 2 tuners so you can record two programs at the same time. I can't wait to see what it looks like on the 52" screen when it arrives.