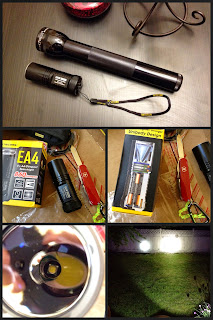 I recently purchased a Nitecore EA4W flashlight after educating myself with some of the excellent reviews written by Selfbuilt over on CandlePowerForums. I'm very pleased with this high-powered compact LED flashlight that runs on only 4 AA batteries.

Before I knew anything about the real world of flashlights I purchased a MAGLITE® LED 3-Cell D Flashlight from Walmart. You can see it in the top picture. It's brightness is rated at 131 Lumens. By contrast, the Nitecore EA4 is much more compact and rated at 860 Lumens. The picture on the bottom right shows the Maglite on the left and the Nitecore on the right shining on a fence about 30 ft away. The difference is clear. The Nitecore is noticeably brighter in the grass directly in front as well as on the fence. I bought the "W" version of the Nitecore EA4 that has a warmer LED than the cool white that is also available. The Maglite has a cool white LED. The compact size of the Nitecore EA4 will make it much easier to throw in a bag or keep in the car. It also comes with a belt holster if you prefer carrying that way. I can't wait to try it out at the campground the next time we are RVing. Although, we might have an unfair advantage at the Flashlight Lollipop Hunts!

For a comprehensive review of the Nitecore EA4 complete with lots of comparison pictures, check out Selfbuilt's review here: Nitecore EA4 (XM-L U2, 4xAA) Review: RUNTIMES, BEAMSHOTS, VIDEO and more!