A Day at the Track 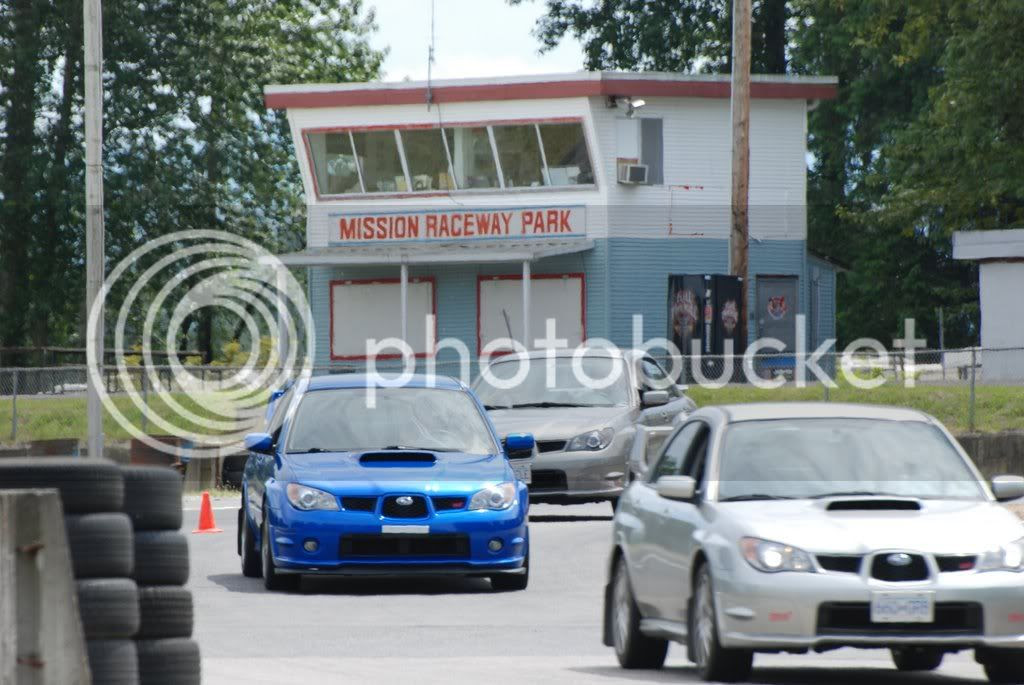 Whoo, hoo! I just completed my first track day! This was an event organized by Geremy from Specialty Subaru in North Vancouver specifically for Subaru owners. The instructors were from Driving Unlimited and I had an awesome time practicing techniques like heel/toe shifting and trail braking. Going down the straightaway hearing the roar of the boxer engine at full throttle had the theme music from Gran Turismo 2 playing in my head and put a huge grin on my face.

The event was held at Mission Raceway Park and started at about 8:30. There were 24 vehicles (including a few non-Subarus) registered for the course and once everyone signed the waiver....

...the instructors began explaining basic concepts about setting up the proper seating and mirror positions on our vehicles. They also explained the three warm-up exercises that we would be doing on the track.

I've taken a couple of Driving Unlimited's Collision Avoidance Courses over the years (most recently last month) so I was familiar with what we needed to do--we just needed to do them at a higher speed. One of the instructors first lead us around the track for two laps so that we could get familiar with it. We did the exercises a few times before we were sent back to the tent for debriefing. After that, we got into groups of 3 or 4 and each of us took turns being in the lead car when the instructors drove our cars to show us the proper racing line and where we should be looking at each turn.

Finally, after the lunch break, we put on our helmets to do some real driving. Again, we went out in groups and took turns being in the lead, but this time the instructor rode shotgun and evaluated our driving and gave tips and feedback. It wasn't my turn to be lead right away so I did my best to follow the racing line they had showed me and to keep up to the car in front of me. It wasn't until I became lead car and the instructor told me I was braking way too late and too hard that I realized I wasn't doing as well as I thought it was! :LOL:

After everyone had a chance to lead, we went back into the pit area and were debriefed while the other half of the drivers (ones who had previous track experience) went on the track. Our debriefing included discussion on trail braking and that lead to heel/toe shifting. Those were things I concentrated on for the 2nd session which turned out only slightly better than the first. I was focusing/worrying about doing a heel/toe downshift while I was trail braking that I simply missed downshifting altogether and was in the wrong gear coming out of the turn. So for the 3rd driving session, I decided to give up on trying to heel/toe shift and tried to shift as smooth I possibly could. My driving for the 3rd session was even better than the 2nd, I could notice myself getting smoother around the track. For the 4th and final session, I got separated from my original group and instructor, so I went out with another one. This time there was no swapping cars and we just did about 4 laps on our own with the instructor remaining in the lead car. I was able to improve some more on being smooth, but it was a little disappointing to me because the lead car (I was second) did not go full throttle on the straightaway so I could only get into 4th gear. With the other group I was able to get into 5th gear at a speed of about 140-150km/h before I needed to brake for Turn 1. Actually, on my own once, I got into 6th gear at 160 km/h but I braked too late and messed up my entry into the turn :LOL:

Anyway, that was basically how the day went. I had filled up at the gas station near the track in the morning and afterwards I topped it up again. I found that I burned close to 29 L of fuel (almost half a tank) at a total cost of about $43. The cost of the full-day training was $298 which included a catered lunch.

Overall, I had a great day and I'm ready to sign up for the next one!