Fun in the Snow 5 - 2006
Originally uploaded by istargazer.

We've had quite the weather the last few days. First, we had a major snowfall on the weekend. It was the most snow that I remember falling at one time. It actually started snowing Saturday afternoon and didn't stop until Monday morning. On Tuesday we had an artic outflow that dropped overnight wind chill temperatures to -20 C. Then last night we had another storm with snow and freezing rain that dropped over another 12 cm (5 in) onto our steps. Overall, where we are at the top of the mountain, we've had over 60 cm (2 ft) of snow these last few days. It's quite unusual for November in the usually balmy "Rain-couver." Our neighborhood, which has always been well plowed and salted in past years, was not maintained as much--probably because work crews were busy attending other areas. Buses stopped coming up the hills and garbage hasn't been collected all week. At least the worst of it is over for now. Temperatures are predicted to rise for the weekend.

During all of this I've been happily driving around in the Subaru STI and am very impressed with the performance of the Hankook W300 Ice Bears I bought last winter. They've performed very well in the snow, ice, and slush with very little signs of slip unless I go heavy on the throttle. Consumer Reports gave these tires a "poor" rating for snow traction and I agree that in fresh, deep snow they may slip more than other tires with really deep grooves. But the Hankooks are performance winter tires and Consumer Reports also rated them "very good" in the important safety areas such as braking on ice and wet, as well as in handling and hydroplaning. It rated "good" for dry braking. All of these factors are more important to me than deep snow traction, because living in the Lower Mainland, those are the conditions that I encounter the most. I also know from last year that the treadwear was very good. When I was waiting for the WedsSport wheels to put on for the summer, I had to keep using the Hankook Ice Bears well into June and hot weather. When I finally took them off, they showed very little wear.

I was so impressed with the Hankook Ice Bears that I bought another set for our 2006 Honda Odyssey. Originally I wasn't planning on buying winter tires for the van. But considering that we live above the snow line I just felt that it would be safer to drive on proper tires and not have to predict what the road conditions will be before we go out. With winter tires on the Odyssey, I have the extra security knowing that the tires will be performing at their best. I really think it's important because the tires are the only thing keeping us on the road. I ordered the tires from TireTrends, the same place I bought them from last year. Compared to other brands, the Hankooks are quite cheap and considering the performance they give, it makes them an awesome deal. I paid $117/tire for 225/70/16. This size is close enought to the OEM tires (235/65/16) not to cause any problems. Unfortunately, there is only one winter tire available in the OEM size: Bridgestone Blizzak WS50. However, even though I've heard that the Blizzak's perform very well, I've also heard that they have terrible treadwear. I ordered steel wheels from our Honda dealership to mount the Hankook Ice Bears on, but they're back-ordered so the tires are just sitting my garage now. 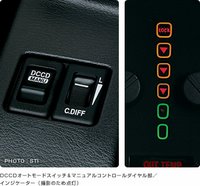 I actually drove out to Maple Ridge in the STI after work yesterday (just at the beginning of the last storm front) to pick up the tires. Despite the falling snow and busy traffic, the trip wasn't that bad. The STI just performs so well in these slippery conditions especially because of the Driver Controlled Center Differential (DCCD). (The picture on the left shows the Japanese-spec control switches. On the North American STI's, the dial and the switch are reversed.) It allows me to adjust the torque split between the front and rear axles. When it's on automatic, the computer puts the power when and where it's needed. In the snow I switch the DCCD to full LOCK and I'm able to power through throttle-induced slides with great ease. It's a blast! I guess the STI's rally-car heritage really shines in these types of road conditions :0)
Mods/Accessories Stargazer